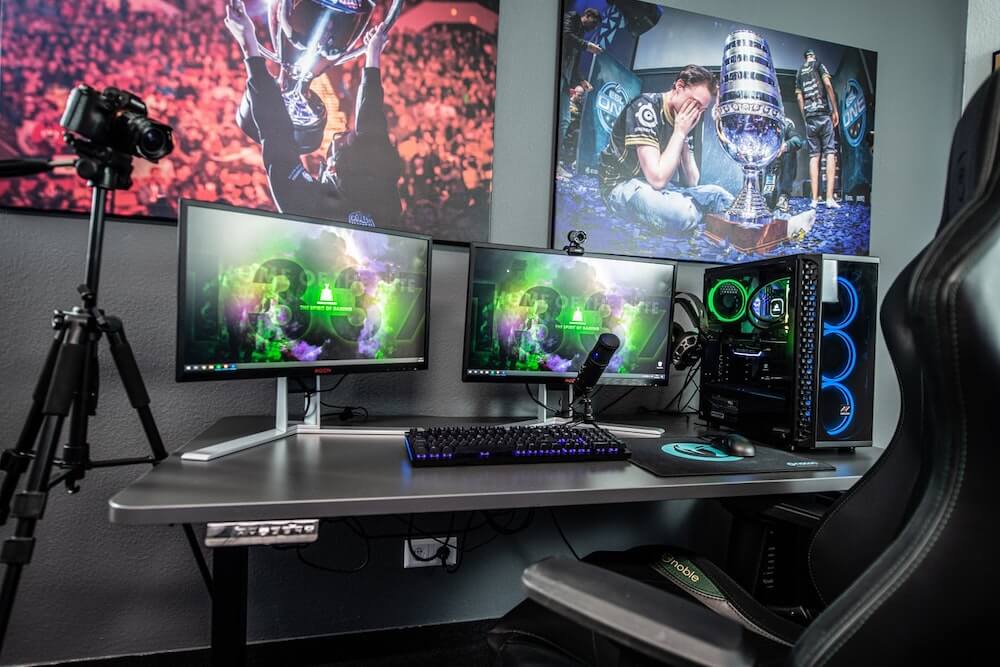 Cloud gaming – the current megatrend in the gaming sector is on everyone’s lips. But what does it mean? The bottom line is quite simple – cloud gaming is supposed to make hardware, physical games and long downloads superfluous. Similar to Netflix for movies and series or Spotify for music, all content – i.e. games – are streamed live from the Internet without interruption or waiting time. The big difference and advantage, however, lies in the hardware mentioned. Whereas today the latest games require the latest and extremely expensive top-of-the-line hardware, cloud gaming only requires a simple playback device such as a TV or an old PC and, if necessary, the provider’s receiver. The games themselves then run on far-away computer farms and are exclusively streamed. New hardware or long downloads are therefore no longer required. However, very fast connections are of course required for cloud gaming; in principle, reasonable gaming is not possible below 5 MBit per second.

Customers therefore only acquire the right to stream the respective games. The concepts of the individual providers vary. There is often a kind of games flat rate, which is supplemented by titles that have to be purchased. There are five major providers on the market that want to usher in the revolution.

GeForce Now has been officially launched since the beginning of February, after the service was available in a free beta phase for years. GeForce Now is offered in two variants: Users can choose between a monthly subscription of $9.99 and a limited free version. The free version limits the current playing time to just one hour. The service is offered by Nvidia, a hardware manufacturer that actually specializes in graphics cards. Geforce Now runs on devices with Android, macOS, Windows and Nvidia’s own Shield TV system. Thus, the service is particularly exciting for Mac gamers, since they usually only have a very limited selection of games – this is omitted with cloud gaming. GeForce Now already supports over thousands of games, including top titles like Fortnite or the Assassin’s Creed series. You can easily find out if your game is also supported on this page. You don’t need any extra hardware for the system, the streaming software is simply installed on an existing system. This is of course extremely convenient. According to the provider, the possible frame rate is between 60 and 120 FPS, which of course depends on your own internet line. Existing games in a Steam, Epic or Ubisoft Connect library can easily be used with GeForce Now. GeForce Now is currently available in Europe and North America. Since mid-November, GeForce Now can also be used on the iPhone and iPad thanks to the web app (you can’t find Now in the App Store, but access is via the Safari browser). This makes GeForce Now the first major cloud gaming service to be available on Apple’s mobile devices.

The PlayStation Now service is available for the Playstation and the PC. Games can be streamed from the Playstation to the PC, assuming a good Internet connection. This gives PC gamers the opportunity to play Playstation’s top titles on their PC for the first time. PlayStation Now is already live and can be subscribed to (and cancelled) for a year or monthly. The selection is impressive. Over 650 games are already available in the library and new titles are added monthly. The available games range from AAA blockbusters like Red Dead Redemption or Mafia 3 to exclusive PS titles like Bloodborne to indie gems and smaller titles. All games can also be downloaded to the Playstation 4 hard drive for offline play. This is a big advantage of the platform, because the Internet can also fail, which is a big problem with cloud gaming. Also, this guarantees the maximum resolution of 4k (for supported games it is 1080p) and maximum frames per second. The games can be played for as long as you want, there is no time limit after which you have to log in again or something similar. With a one-week trial version, interested gamers can first check whether the offer is the right streaming service.

The search engine giant Google enters the gaming stage with Google Stadia. The service has been available for pre-order since November 2019, while the standard version has been announced for 2020. Due to Google’s immense market power, this is of course an extremely exciting development. However, the launch of Stadia in November was quite bumpy. Many announced features, such as the “State Share”, i.e. linking to certain game situations, were not available at the start. The first Stadia testers also complained about technical difficulties. The games run on Google servers and are streamed to customers’ devices. Similar to other providers, Google combines a monthly subscription with paid individual games. Games will be added monthly, but the library is not yet known. The games are expected to run in 4k resolution and 60 FPS. Those who buy new games on Stadia will have to pay the normal price in most cases, which ranges from $50 to $70. Games that have already been purchased on another platform can unfortunately not be used on Stadia. However, games purchased directly on Stadia can always be streamed in 1080p everywhere without having to lug around expensive and bulky hardware. Google currently offers a limited Founder’s Edition, which includes the Chromecast Ultra needed for playing on the TV and a limited controller. However, this edition is already almost sold out in some countries. Besides the TV, Stadia is also supposed to be compatible with computers and even tablets and some smartphones.

Due to the Corona crisis, Google is currently offering Stadia for free for two months. However, the tariff automatically changes into a paid one, which is why you should cancel early.

The xCloud is Microsoft’s answer to Google’s Stadia. The project was presented at E3 2019 in a very short five-minute slot. Florian Liewer, Director Xbox Gaming in the German-speaking region, explained to t3n: “Gaming in the cloud is an extension, an additional option for all gamers out there”. Microsoft is therefore cautious in the area of cloud gaming for the time being. xCloud works similarly to Playstation Now. On the official site, where you can register for the preview version of Project xCloud, you can find out that the service streams Xbox games, such as Gears 5, Halo 5, Killer Instinct or Sea of Thieves, directly from the cloud to a mobile device. According to Microsoft, a mobile device with Android version 6 or older is required. It will also be possible to play on the iPhone and iPad via the xCloud. However, there is no app for this. Gambling will be done via the browser, via Safari to be exact. The reason for this is to provide a “seamless experience” for Xbox users and different types of players. A look at the browser version can be found on the IT blog The Verge. First, the xCloud will only be available in America, England and South Korea.

In a blog post in July 2020, Microsoft announces that its own cloud gaming service Project xCloud will be linked to its own games subscription Xbox Game Pass. So those who are already customers of Xbox Game Pass Ultimate will also be able to use the cloud gaming service at no extra charge. However, those who are not subscribers of Game Pass Ultimate will be left out in the cold. At market launch, you won’t be able to book xCloud separately.

Microsoft announced its own streaming stick for the xCloud service at E3 2021. The company is also working on installing xCloud directly on numerous smart TVs. In this case, a stick would no longer be needed. However, Microsoft did not announce when that would be the case.

Vortex is a rather small provider compared to the other providers, but that does not mean that the selection of titles is worse. More than 100 popular games like Fortnite, Apex Legends, Teamfight Tactics or League of Legends are already available for streaming. But also big single-player titles like Witcher 3 or Shadow of the Tomb Raider are available in the library. A monthly subscription buys 50 hours of gameplay. This is certainly too little for frequent gamers, but sufficient for the normal hobby gamer, even if other providers have the edge here. However, some games, such as GTA V, have to be purchased on Steam before they can be played via Vortex. With Vortex, however, the titles can also be played on platforms other than the ones actually intended, so Counter-Strike can be played on Android, for example. Like all other providers, Vortex also provides the necessary hardware, so that a high-end computer is no longer required. With their own apps for mobile platforms, even controllers can be emulated. The official Vortex homepage offers a ping test that shows whether your Internet speed is sufficient for cloud gaming with the provider.

Casino 0
Betting systems are old hat in the gambling business, but they require diligence, patience